In the seemingly endless grey days of a typical Portland winter I struggle with seasonal affective disorder and a few winters ago I began using  this lamp to help me cope. Needless to say, when we moved to Alaska I packed it with an anxious eye toward the infamous short days ahead.

In the heart of our December darkness the sun rose at 10:14a and set at 3:41p. It must be a function of #alaskamagic that in my first Anchorage winter I really never found 5 hours and 27 minutes of daylight bleak and depressing. Instead, I lived an adventure. I’ll probably never forget the afternoon I drove down from the Eagle River Nature Center at 3:20p. I was eager to get home, hoping to get some pictures of the fantastic sunset in progress. I didn’t make it.

We have windows all along the south-facing side of our house and it’s been entertaining to watch the sun’s path as it rises and sets in the southern sky. It never gets very high in the sky these winter months.

Since the end of January , however, we’ve been adding 5+ minutes of daylight each day. David tells me we’re in something called maximum slope. He made me this chart last fall to help me visualize the differences between Anchorage, Alaska and Portland, Oregon. 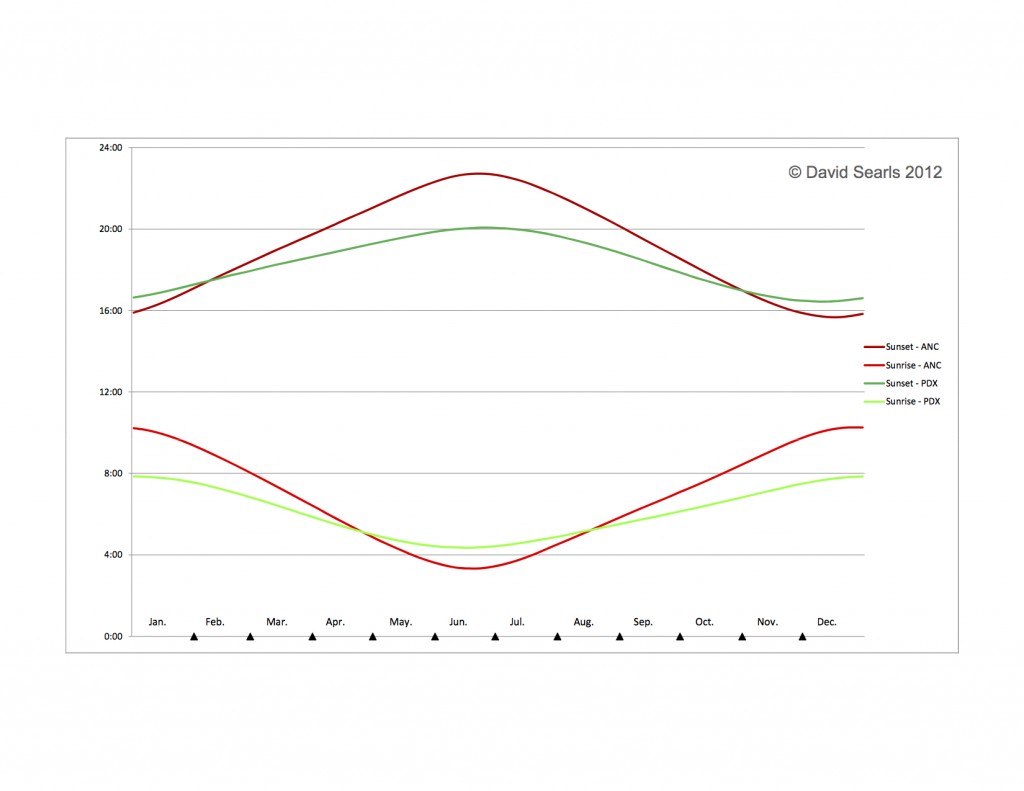 We have now crossed sunset paths with Portland. According to timeanddate.com it sets here tonight at 5:37p while it sets at 5:32p in Portland. There are variations in the exact times depending on the source, but in all cases the Anchorage sun sets later and will continue to do so at a rapid pace until it slows down toward the end of May and then ultimately sets at 11:42p on June 19. It rises at 4:20a that morning to give us 19 hours and 21 minutes of sunlight.