No School Snow Day in Anchorage

After 28 days in a row with no measurable precipitation, snowflakes were drifting in the air while Ethan was getting ready for school last Tuesday morning. There’s been snow on the ground (and often in the air) the majority of his fifth grade year now. We had some snow come and go in November, but by December, the snow was here to stay. A few weeks ago he thought it was pretty funny when I received this text from a friend in Oregon:
Just in case you were wondering what it looks like here when school is CLOSED for a snow day….. 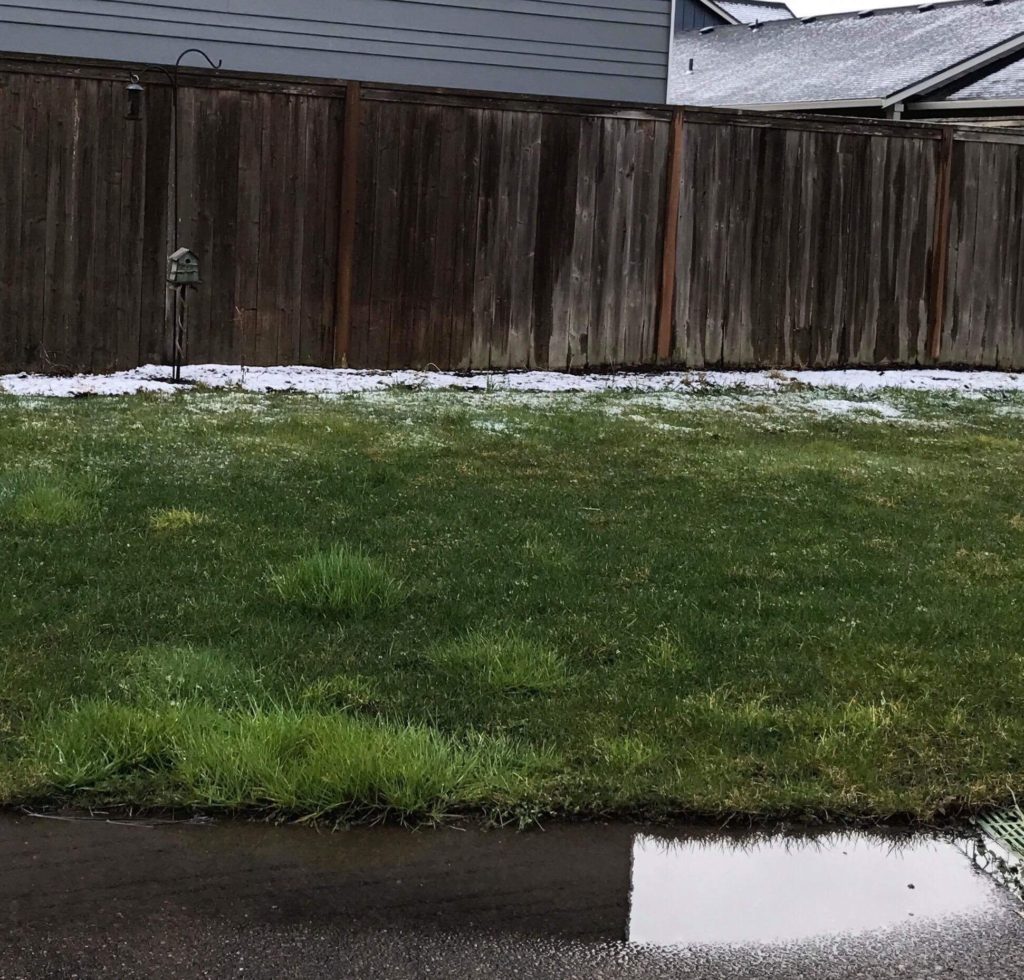 Someday Ethan will tell kids stories about walking to school in sub-zero temps long before sunrise, and how he tromped home again just as the sun was setting. (sunrise was 10:15a on December 21 and sunset was 3:42p) He will tell how they always had outdoor recess unless the temperatures dropped below -10 (or there was a moose on the playground) and his stories about a recess sledding hill will be true (at least the part about changing into snow pants and playing on the hill). Some afternoons this winter he’d come home, drop his bag, grab his skates and meet up with his friends down on the frozen lagoon. So, having thoroughly adapted and embraced schoolboy life in Anchorage Winter, he joked, as he headed off to school last Tuesday, that perhaps “they should cancel school today for all the snow!”

It drizzled snow off and on all that day and by evening the forecasters held fast to their predictions of 5-9 inches coming in the night. I wasn’t too excited about this prospect. Spring breakup is a nasty affair. Layers and layers of snow and ice melt off to form huge grimy puddles and reveal hidden “treasure”. Here’s an old, good article on the science of break up.  This year, the dry month of March had allowed melt off to happen in a rather tidy fashion. In spite of the cold temperatures, the sun has been busy. Downtown roads and sidewalks were largely clean and dry Tuesday night. But it had started snowing in earnest by the time  I went to bed, just after midnight, and sure enough, a 5:30a text announced that schools would be closed. It was still snowing and it kept snowing throughout the morning. It turned out, Ethan really wasn’t all that into having a snow day. Piles of snow were pretty much old news on the 29th of March. Meh. In the early afternoon (10 inches later) it finally stopped and the sky brightened. But by evening it shifted again and the whole grey snowy show started up once more. 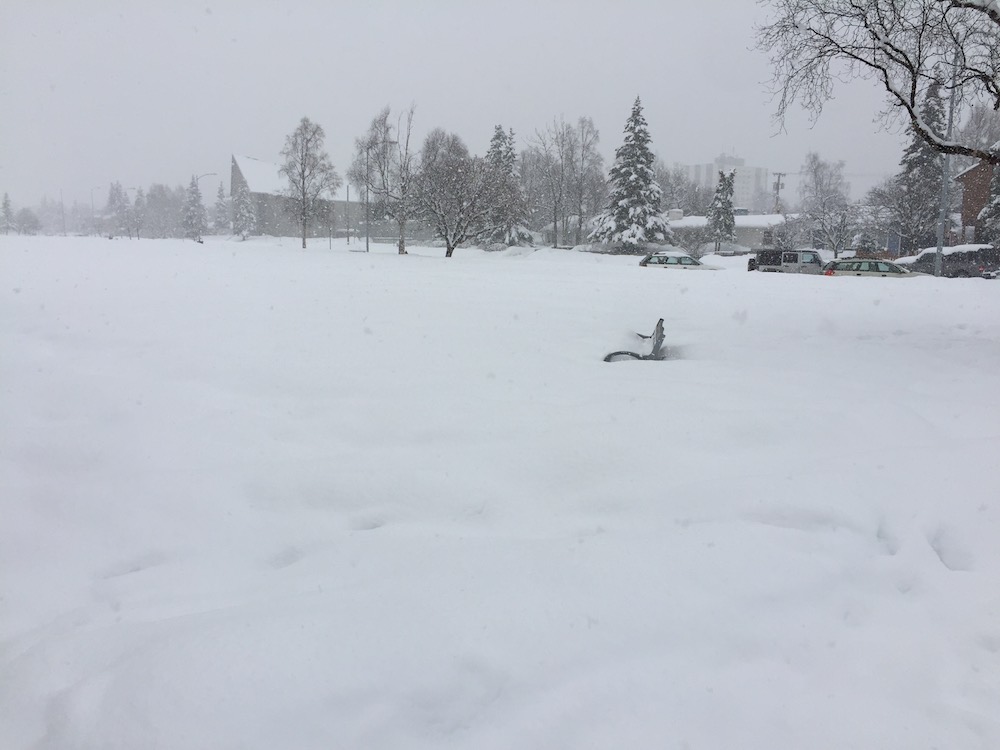 It’s been a good winter for skiing. Last year was a low-snow year and warmer temperatures these past few years have meant more ice and yucky ski conditions. But this year made for good Alaska fun and the boys regularly came and went with skis and skates and bikes in the snow. At night I’d listen to snow plows scrape down our street and remember our first winter here (2012-13 for reference on the chart below) when my experience of living in this dramatic winter landscape was all curious and brand new.

But it’s not brand new anymore. A big snow dump on March 29 feels kind of pointless (except for getting a day off school, apparently) and mostly annoying. It may extend skiing the trails by a little bit, but it much more significantly tangles traffic, and when the forecast is for rising temperatures by the end of the week, it essentially serves up a big batch of time release rain. Not necessary!!

Sure enough. By the weekend we shifted up to 40 degree temperatures (it’s been a long time since we’ve had a stretch of 40+ degrees!) and break up is officially ON. Standing water. Frozen drains. Potholes. Ice-rutted sidewalks.

The newspaper published a chart last week, showing how our late snow day compared to other years, and offers some perspective for how long it may take for it to all be gone. 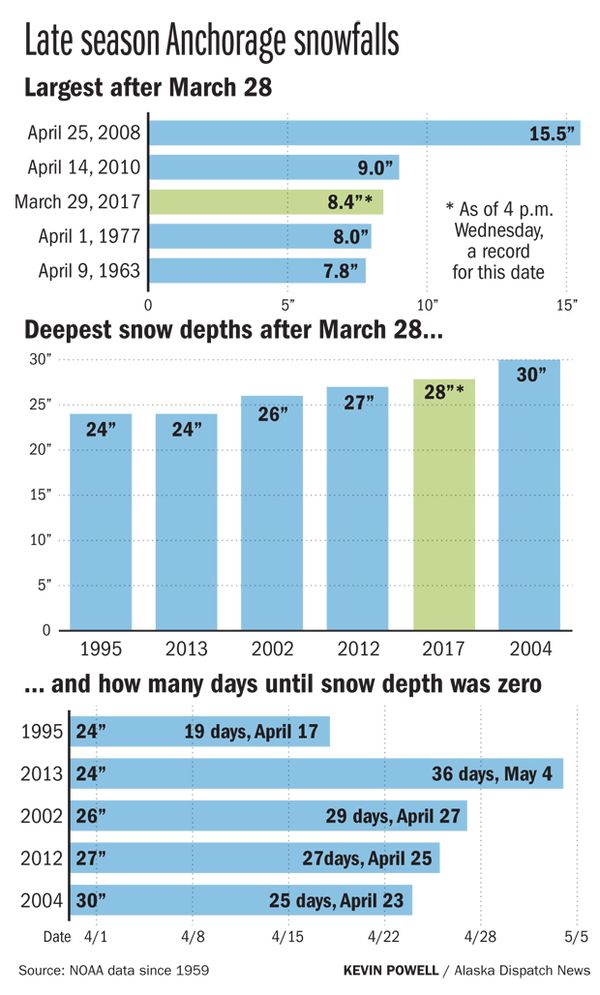 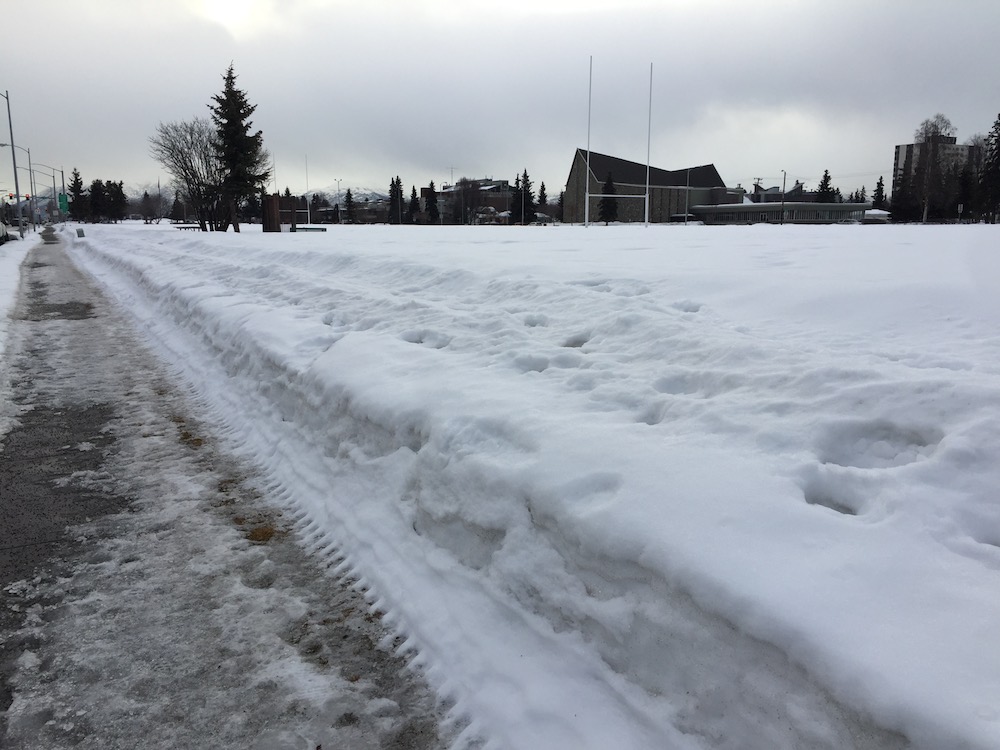 Overnight at the Eagle River Rapids Yurt
Next Post: Signs of Spring