After 3 weeks of August rain, the sun finally came out! We spent the gift on a hike up Mt. Baldy on Sunday. We’d been there once before as a family – in fact, Baldy was our first Alaska mountain hike. On July 14, 2013 I wrote a Google+ post   that went like this: Yesterday we hiked up Mt Baldy – in the Chugach above Eagle River. There was no signage and we had very little navigational info but we’d heard it was a good family hike and it was a beautiful day so we went exploring. It was a fantastic hike. We tromped through the trees and scrub (black bear country but we were prepared) before eventually coming out above the treeline where the trail through the tundra took us up to a rigeline where it was an easy walk to the peak. We talked to a couple people along the way who pointed out other hikes and gave us information about the general area. We look forward to returning for more adventures here. Including blueberry picking in the fall! The mountainside tundra turns red with the blueberry bushes and the boys are eager to return our own very own Blueberries for Sal adventure. Preferably without Mother bear and her cub! 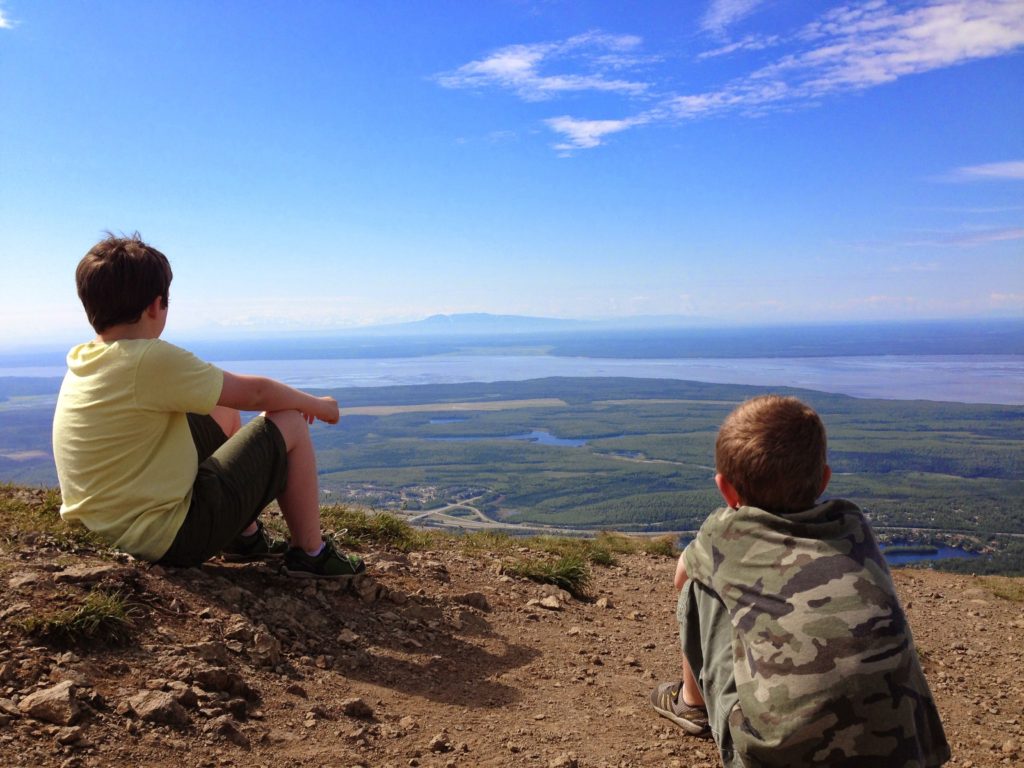 During these past 4 years David’s been up Baldy a couple more times, but I never returned. We ended up finding our Blueberries for Sal adventure the following year in Arctic Valley and then we moved away. And now we have returned. As we drove up to the unmarked trailhead we reminisced – the boys recalled the night we got them out of bed, bundled in snow pants and coats, and drove up there to watch the northern lights. That was our first experience standing out under a great big dancing sky. And I remembered aloud how nervous I had been on the trail through the scrubby trees the first time we hiked to the top. I was scared of the bears. Three years later I’m still scared of the bears, of course! But I know and understand so much more now. For one thing, I know how to actually use the bear spray. I also know there are not likely to be bears lurking around every corner up there. Now I can walk prepared. And aware. But not so nervous. It’s way more fun.

The trailhead begins where the road ends. It’s a “park against the mountainside where the road ends” sort of spot and by Alaska standards (there aren’t that many of us up here), there were a lot of cars already parked when we arrived about noon, but we easily slid into a spot near the top, gathered our things, and set out. There are two trails to the top of Baldy. One is pretty much straight up the face. But we take the laid-back, 2-mile walk up around the backside that has a little stretch of serious UP before reaching wide open tundra, and then the saddle where you can pretty much just stroll to the summit. We actually didn’t encounter many people once we got away from the trailhead and into the trees. It’s been a banner year for mushrooms and Ryan periodically stopped to practice his identification skills as we meandered up the trail. Eventually we broke out above the treeline and OH! that view. 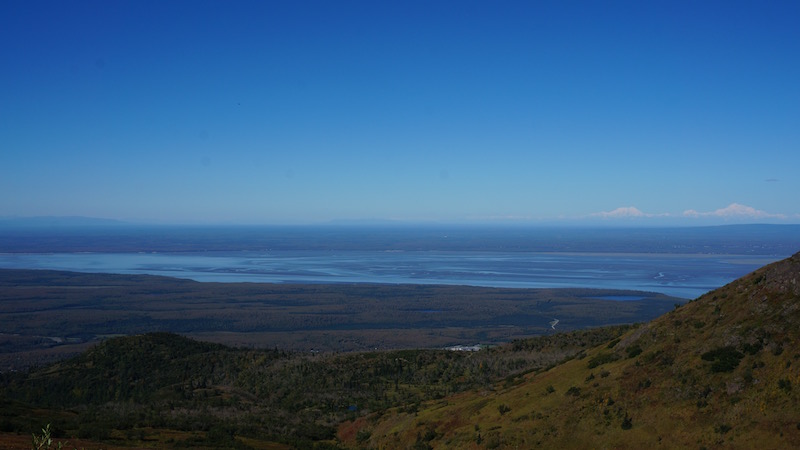 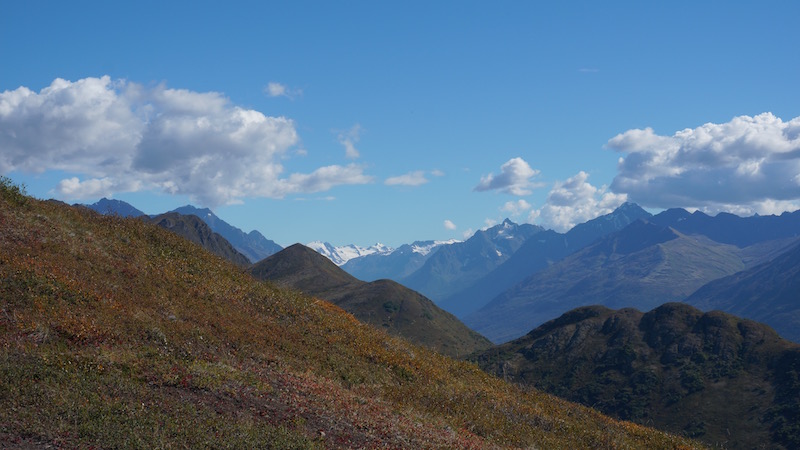 As we continued toward the top we pulled off every once in awhile to eat blueberries and exclaim at the mushrooms growing even way up high on the tundra. 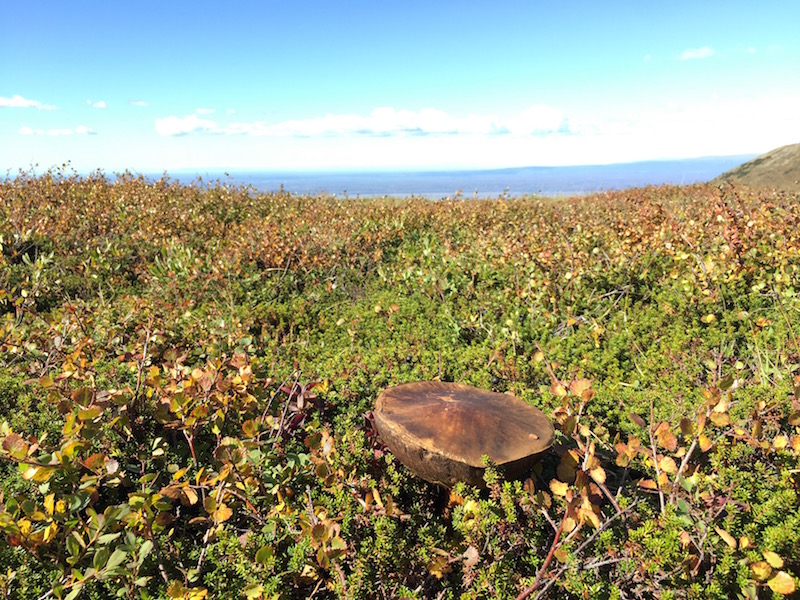 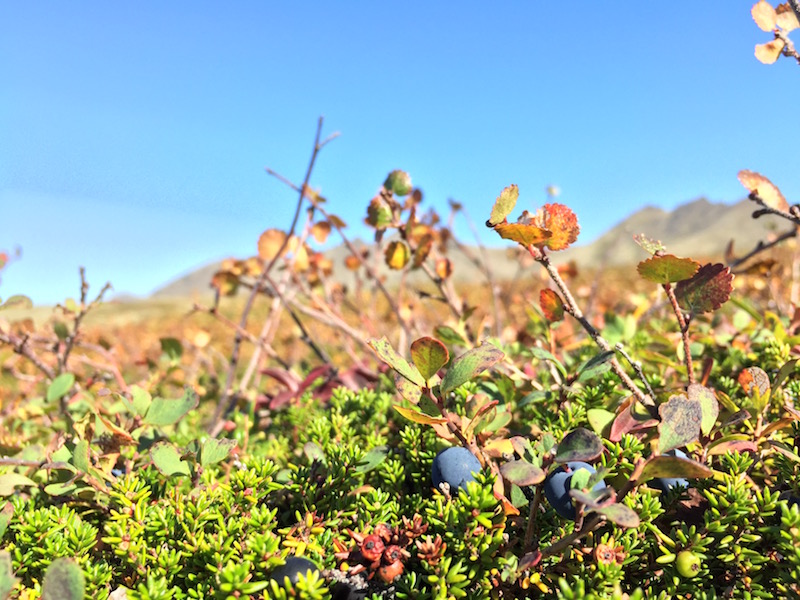 The berries were plentiful and easy to pick at the top and we stopped to fill one of our containers before catching the trail along the saddle to Baldy. At the top we encountered several groups of people who had come up the face of the mountain and were happy when we told them about a different way down. 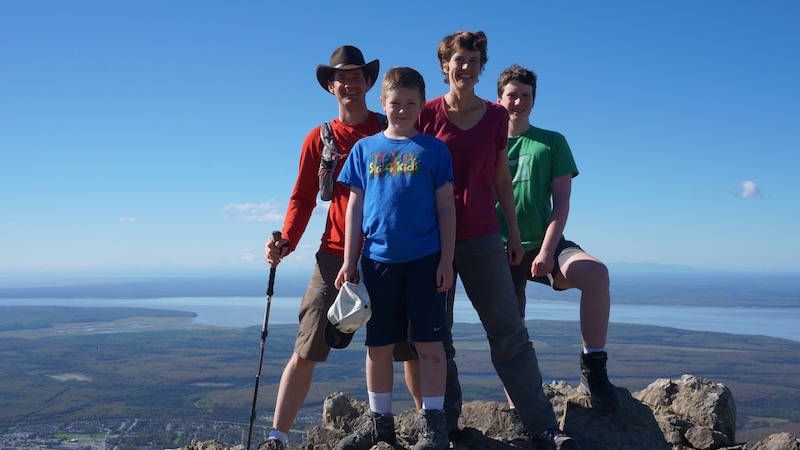 I think flowers in the scree at the top of a mountain are awesome. Because resilience? Determination? Beauty in the hard things. 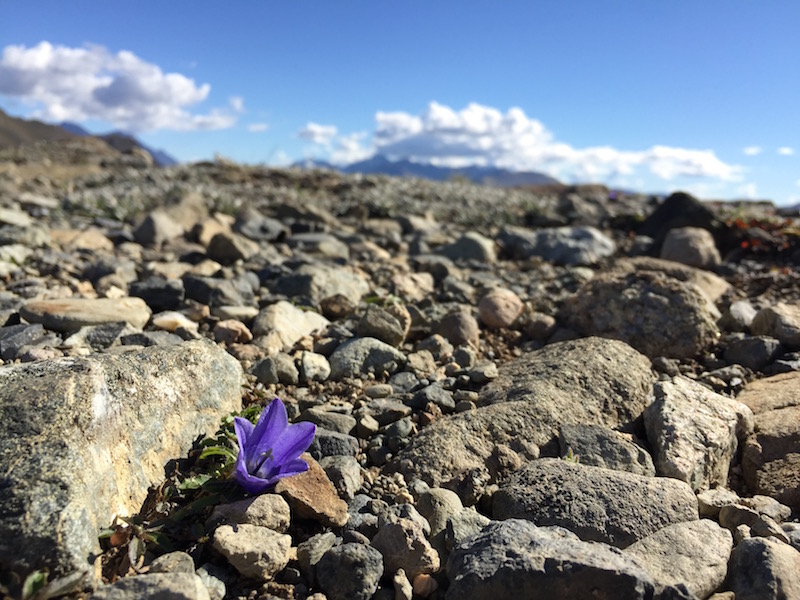 We stopped and picked our second container of blueberries near the top before heading down the mountainside, surprised by the numbers of people heading up through the trees as we worked our way down and out. 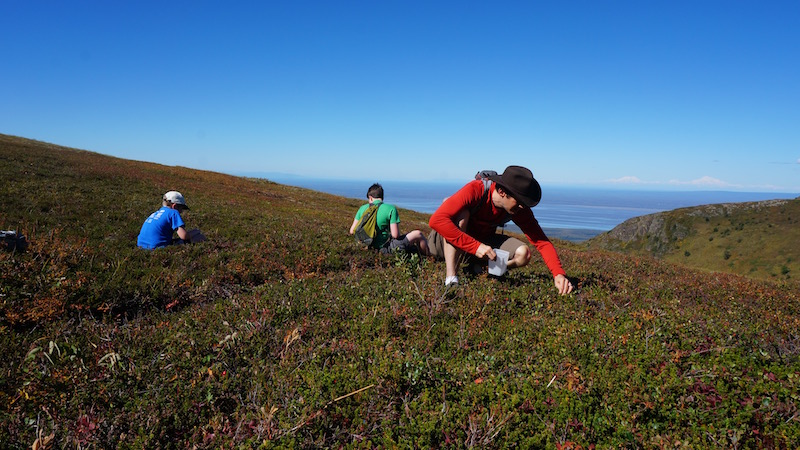