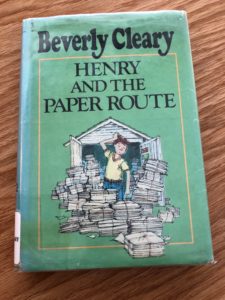 Henry grinned. “Well, so long,” he said, and mounted his bicycle. “I’ve got to get on with my route.” His route.  Henry felt like shouting the words so the whole world could hear them, because at last he was doing what he wanted to do –something important. And on Saturday he and Murph would start building their own private telephone line. Good old Murph! It was lucky he had moved into the neighborhood. Life, Henry discovered, was suddenly so full of interesting things to do that he rode his bicycle through a pile of autumn leaves in the gutter just for the joy of hearing them crackle. “Clank, clank!” Ramona yelled after him. “Clank, clank!” answered Henry.

New friend, new job, ongoing adventures in the neighborhood…..Growing up on Klickitat Street.